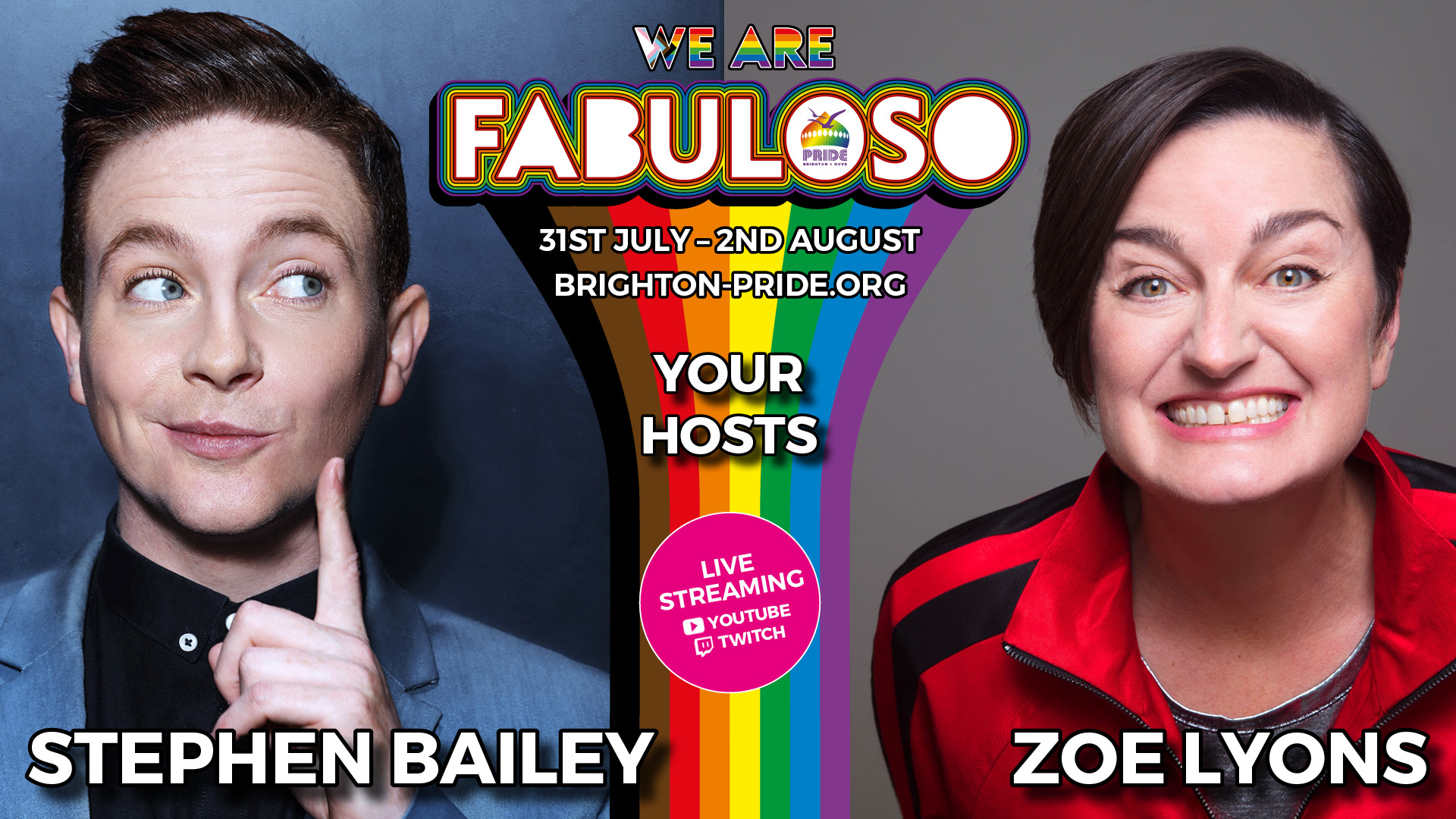 Stephen Bailey and Zoe Lyons to host We Are FABULOSO!

By ChrisJ25th June 2020No Comments

Brighton & Hove Pride is thrilled to announce comedians and broadcasters Stephen Bailey and Zoe Lyons to host We Are FABULOSO! Brighton & Hove Pride’s Digital Festival, live from a purpose-built studio in Brighton this summer on Saturday 1st August. The show will be live-streamed on the Brighton Pride website, YouTube, Twitch and other platforms to be announced.

Stephen is a cocktail of class, caring and comedy, with the most flamboyant umbrella to top it all off. He’s a comedian, presenter, television personality and writer, whose friendly and open brand of gossipy humour has made him one of the UK’s most exciting up-and-coming acts in comedy at the moment and an in-demand talent for all thing’s showbiz/entertainment.

Currently, he is the narrator of ITV Be’s Ferne McCann: First Time Mum, the host of Takeshi’s Castle on Comedy Central, and had done loads of other telly including Live at the Apollo (BBC Two), Mastermind (BBC One), Coronation Street & Good Morning Britain (ITV) and The Apprentice: You’re Fired (BBC Two)… but he still cannot get on Strictly.

Zoe has been a regular on the comedy circuit for many years and runs and hosts the very popular Bent Double night at Brighton Komedia. As well as many regular radio appearances, her television appearances include Have I Got News for You, Celebrity MasterChef and being a series regular on Mock The Week, Live at the Apollo (BBC1), The Apprentice: You’re Fired (BBC2), Room 101 (BBC1), Hypothetical (Dave), Dave Gorman’s Terms and Conditions Apply (Dave), Pointless Celebrities (BBC1) and winner of Celebrity Mastermind (BBC1).

Marking 30 years of LGBTQ+ campaigning, protest and celebration while helping raise essential funds for our LGBTQ+ community groups, We Are FABULOSO! will feature live, recorded and archive footage of local and international artists, performers, activists and DJs.

Viewers are encouraged to make a donation so Brighton & Hove Pride can continue its essential fundraising for our community organisations that provide so much support throughout the year.

Our sole ethos is to promote respect within our community and support local charities and causes through fundraising. In the last six years we have raised over £920,000 for neighbouring charities, projects and community groups, distributed through The Brighton Rainbow Fund and Pride Social Impact Fund.

For more details of how to view, click here.