From the moment the Princess of Wales’ Parachute Regiment descended from the sky with a burst of rainbow smoke to deliver the rainbow flag at 11am, the Brighton Pride Community Parade glittered with hope and love, a shining Summer of Love as we celebrated with our amazing LGBT+ community, supporters and allies in the seaside sunshine. The 2017 Pride Community Parade, supported by Gatwick Airport, was a glorious riot of colour, music and dancing, a thrilling Carnival Of Diversity where 94 year old George Montague, the Oldest Gay In The Village, paraded alongside young LGBT+ Rainbow Families, community groups, dancing paramedics, smiling police officers, samba dancing lovelies, business supporters, magical community floats, a giant rainbow flag and drum banging delights.

A truly life affirming spectacular weaving its way through Brighton & Hove’s city streets bringing smiles to the tens of thousands of spectators who lined the pavements, the Pride Community Parade once again confirmed its place as the UK’s brightest and biggest LGBT+ Pride event with over 300,000 participants and spectators.  50 years on from the partial decriminalisation of homosexuality it was fitting that the Pride Community Parade also highlighted the continuing fight for equality, as it’s creative #SayNoToHateCrime placard campaign shone a light for those victims of hate crime across the globe regardless of sexuality, race, religion or gender.

On a day Brighton & Hove can always be proud of the Pride Community Parade delivered the most sparkling, glittering and love filled way to begin Brighton Pride weekend, fuelled by sunshine, smiles and pure, pure happiness. It was a day we shall never forget, a day when we all came together under one giant rainbow, a day when love truly won. 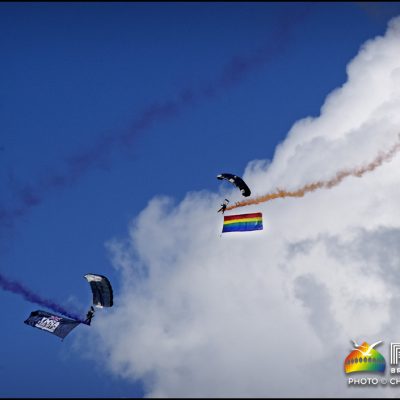