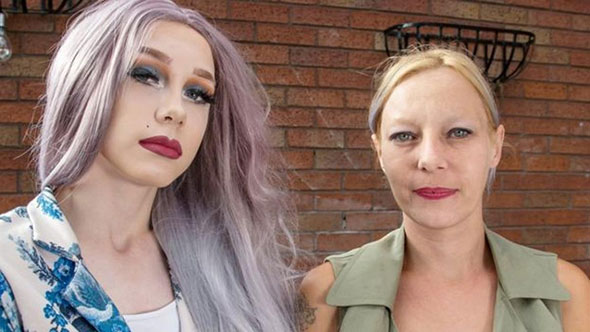 By ChrisJ28th July 2018No Comments
Brighton & Hove Pride are thrilled to announce that Dudley teenager Lewis Bailey, who performs as Athena Heart, will be joining us at our celebrations next week.
Lewis made the news recently when he was banned from performing as Athena at his school’s end-of-year talent show at Castle High School and Visual Arts College because it was not “appropriate”.
Brighton & Hove Pride strongly disagree and feel any expression of a persons individuality is a thing to be cherished and celebrated, so when Tom Jenkins, aka Martha d’Arthur, approached us about inviting Lewis and his mum Natalie, we jumped at the chance.
Lewis said, “I want to get my story out to show others my age it’s ok to be different and to be proud of who you are.”
Martha said, “After seeing Lewis’ story on social media on Sunday, it upset and lit a fire under me that a school would imply that all drag is somehow sexual and shameful, so I reached out to Lewis and Natalie on Sunday to see if I could offer him the amazing and positive experience of performing at one of the most phenomenal Pride celebrations in the world, in Brighton. Working with Lola all week to ensure that we could orchestrate it… I’m thrilled to show Athena/Lewis and Natalie a Pride that they’ll never forget for such an inspirational and brave young queen in the making!”
Natalie, Lewis’ mum said, “The support Lewis has had has been amazing, he’s so glad the story is out there to let others Lewis’ age know it’s ok to be different and to be proud of who they are. Lewis is also feeling very loved by all that have supported him and the continued support he has for the future.
“I also think the support has been tremendous it’s boosted Lewis’ confidence in his quest to prove it’s ok for kids to be different and all kids should have the love and support of people around them.
We are looking forward to attending Brighton & Hove Pride and can’t wait to meet every one that has made this possible for Lewis.”
Lewis and Natalie will be joining us on our ‘Colour My World’ themed Pride Community Parade and then later on the cabaret stage with Martha at the Pride Festival in Preston Park where Britney Spears is headlining.